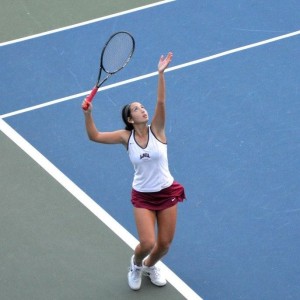 “As a current Division 1 level player, I am very appreciative to have gone through Chris and Angela’s training program on and off the court. Living two hours away from their training facility, they were able to work with me via email and phone. They sent me meal plans, workout plans and kept in touch with me on a regular basis. I would visit them a couple weekends a month and every weekend was always successful and valuable with the amount of training I went through. They pushed me out of my comfort zone day in and day out and helped me become a better player every time I stepped out on the court.

I started working with Chris and Angela Leong around the time when I was beginning my freshman year in high school. During the OSAA state tournament, I had lost to the girl that won the tournament very easily. I continued to train with Chris and Angela and a year later, when the OSAA state tournament came around for my sophomore year in high school, I faced the same girl I lost to in the previous year. I ended up beating her in three sets and it was one of the greatest matches I have ever played. The match overall was a good indication of how much I had improved within a year through Chris and Angela’s training.

Currently, I attend and play for Loyola Marymount. To this day, I still use the instruction and advice that Chris and Angela drilled into my head while I was a junior. Their dedication to the sport is impeccable and they have a lot of experience with developing players in to college players. What I appreciate the most was the ability to create a life long friendship with them. I look up to both of them so much for their hard work and am truly grateful to have had the chance to train with them.”