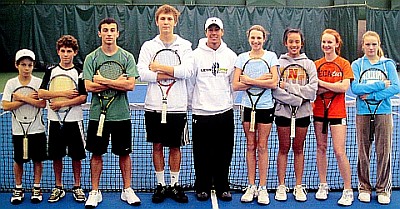 Tualatin Hills Tennis Center in Beaverton, Ore., played host to this year’s Pacific Cup competition, which saw Pacific Northwest and Southern California go back and forth with the lead for much of the weekend. Pacific Cup competition utilizes a round-robin format in which the teams play a total of three rounds, each featuring a new opponent. A complete round includes boys’ and girls’ singles, as well as boys’, girls’ and mixed doubles. Each match consists of one set using regular scoring and team points are scored per the number of games won.

Coached by co-academy Director for Leong Tennis Academy, CHRIS LEONG, the championship decision came down to the final match of the event, a head-to-head battle in the Girls’ 18s division between the two teams representing the USTA Pacific Northwest, Pacific Northwest’s Sophia Bott and British Columbia’s Megan Barber. Sophia Bott went on to win 8-1. LTA player Jenya Pereverzin, helped the Pacific Northwest team win the Pacific Cup team championship for the first time in the history of the competition participating in this event as one of several team members to hold an impressive undefeated record in singles, doubles and mixed doubles. CONGRATULATIONS!