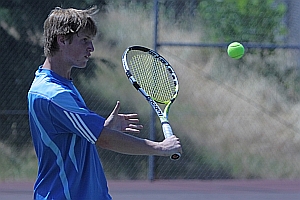 For the months of December and January came many opportunities for the players at the Leong Tennis Academy to challenge every facet of their tennis game. These two months have been filled with many national tournaments, as well as some fun local tournaments in the Portland area.

In mid-December freezing temperatures and a week-long snow storm came with the much anticipated West Hills-Nike doubles tournament. Though this was scheduled as a weekend event, the tournament was constricted to Saturday due to the inclement weather. The cold weather and demanding match schedule, however, was no barrier for the LTA players. Congratulations to all of our players in this tournament. Peter Beatty and his doubles partner Mathew Sipowicz won the boys 16s division, and Sam Stephenson and Jenya Pereverzin won the boys 18s division, beating Stuart Tierney and Chris Seibel 8-5 in the finals. As for the girls divisions, Betsy Sauer and Tasha Hueffner lost in the finals of the girls 18s, and Allie and Kadie Hueffner lost to Dasha Ivanova and Cam Kincaid in the finals as well. Allie went on to win the mixed 16s division with Sam Stephenson winning three matches and defeating Brent Wheeler and Amy Lin in the finals. Likewise, Jenya and Tasha beat Sophia Bott and Aaron Horwath to win the mixed 18s division after three matches of competitive match play. Overall, this was a great success for the LTA players.