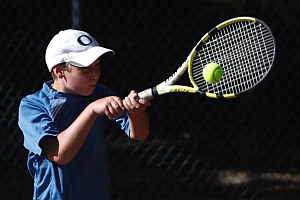 LTA’s Michael Stephenson Battles in Back to Back Tournaments

LTA player Michael Stephenson has stepped up to the plate in recent months, and has been a fierce competitor in many challenger level tournaments. In the City of Vancouver Jr. Challenger from January 9th to the 11th, Michael competed in the Boys 12s singles division, and won the consolation finals. In the Glendoveer Challenger tournament two weekends after, Michael lost in the finals to the first seed Kieran McTagre in close sets. Michael has worked hard to achieve these results, and is working towards moving up to the Champ Level.