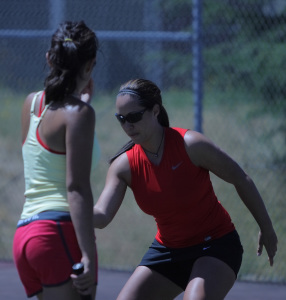 And the TRUTHS will set you free…

Truth#1 If you think you can’t benefit from a practice because your practice partner you are paired with isn’t as good as you, most likely you are not much better. If you were really better you could find a way to make it work.

Truth #2 Drills don’t suck, you most likely “suck” at the drill, and if that is the case it is exactly the drill you should be doing – as often as possible.

Truth#3 If you can’t handle making mistakes, tennis may not be the sport for you. Mistakes are part of the game. To win a match, you do not have to be perfect, you just have to make less mistakes than your opponent. Mistake management is essential for success.

Truth #4 Play against those you hate to play against, as often as possible. They are the ones that know how to exploit your weaknesses. Play with them until you start to figure out how to beat them, then, find other players whose games you loath and start the process all over again.

Truth #5 Do not complain about not playing in the higher level group. YOUR coach does not care about your ego. When they see you are ready to move up, you will.
Learn to control your thoughts and emotions if you want to succeed in the game.

Truth #6 Neither the opponent, the ref nor the spectators can make you mad – the truth is no one has that power. If you are getting angry, its because you are choosing to be. If your anger is affecting your game it is no one’s fault but yours.

Truth #7 Beating somebody once does not necessarily make you better than him/her. To be truly better you have to beat him/her most of the time.

Truth #9 A true win has to happen in a tournament. Beating someone in practice is nice but it does not really carry too much weight.

Truth #10 If you do not like to play matches you are in the wrong sport. Tennis is all about learning to compete. Playing matches has to be an integral part of practice. As a matter of fact drilling should really be a supplement to match play and not the other way around.

Truth #11 Blaming your loss because your opponent was a “pusher” is ridiculous. After all, the so called “pusher” is really a player that understands the golden rule of the game. “The golden rule in tennis is to NOT miss.”  Style and speed, only count if you obey rule number one.